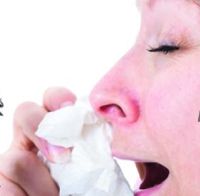 Influenza is an acute infectious disease caused by viruses belonging to the Orthomyxoviridae family, and classified into three types: A, B and C. This classification is based on antigenic differences between the major virion proteins, e.g. M protein and nucleoprotein NP. These types differ in terms of epidemiological properties.
Influenza A virus (IAV) causes acute and chronic respiratory infections. It is a major respiratory pathogen of humans and animals. A period of frequent influenza infections occurs each winter (seasonal flu, the highest incidence occurring in January/February). Only type A influenza virus causes epidemics and pandemics because of antigenic shift that is multiple changes in the various genome segments resulting from reassortment of different strains of the virus.
According to the World Health Organization (WHO) infections with influenza and influenza-like viruses occur globally with an annual attack rate estimated at 5%-10% in adults and 20%-30% in children. Worldwide, these annual epidemics are estimated to result in about 3 to 5 million cases of severe illness, and about 250 000 to 500 000 deaths. The most severe infections develop in children under two years of age, in the elderly aged 65 or older and in those with compromised immunity. WHO recommends vaccination against the influenza virus as the most effective way to prevent infections. On the other hand, because of a large variability of the virus, the difficulty in obtaining sufficient number of vaccines before the epidemic wave, and not always satisfactory efficacy of the vaccine and anti – influenza drugs, the disease still represents an important medical and epidemiological problem. Therefore, new effective drugs for the anti-influenza treatment are needed. The new invention of the Jagiellonian University, which is the subject of the proposed offer, discloses a new drug for the treatment of human A virus (IAV) infection.

Human metapneumovirus (hMPV) was identified in 2001, however, it was proved that infections with this pathogen have occurred in the human population for at least 50 years now. It is the only known Pneumovirus which infects humans and causes both upper and lower respiratory tract infections. Respiratory infections caused by hMPV have been reported in patients of every age and gender, but children under 5 years are most likely to be susceptible to infections caused by hMPV. The clinical manifestations of hMPV disease are flu-like symptoms such as runny nose, cough, sore throat and high fever. The virus is widespread, and is found on all continents. Late winter and early spring is the epidemic peak of hMPV infections. More serious symptoms, including severe lower respiratory tract infections, are found mainly in young children and infants under 5 years of age, elderly individuals above 60 years of age, and immunocompromised patients, whereas immunocompetent adults present mostly flu-like illnesses or cold symptoms.

So far, no other drug has been approved for inhibition and prevention of infections caused by hMPV. By 2012, the only drugs with broad spectrum of activity (such as ribavirin and immunoglobulins) have been used to treat very acute, severe hMPV infections of patients after lung transplantation. The new invention of the Jagiellonian University, which is the subject of the proposed offer, discloses a new drug for treatment of human metapneumovirus (hMPV) infection.

The human rhinovirus (HRV) belongs to the smallest known viruses (their diameter does not exceed 30 nm). During the year, particularly in winter and spring, it causes infections of the upper respiratory tract with humans, appearing as the common cold. Rhinoviruses also cause otitis media, sinusitis and inflammations of the lower respiratory tract, including bronchiolitis, bronchitis and pneumonia.

In spite of the fact that these viruses are the cause of so frequent infections of the upper respiratory tract with humans, development of an effective vaccine preventing these infections is not possible. The main problem is human rhinoviruses occur as a great many serotypes (more than 100 HRV serotypes are know). Moreover, there are no known commercially available medicines at present which would inhibit replication of human rhinoviruses. The new invention of the Jagiellonian University, which is the subject of the proposed offer, discloses a new drug for treatment of human rhinoviruses (HRV) infection.