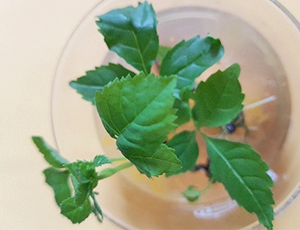 Discover a new technology for obtaining cuttings of common ash developed by the interdisciplinary research team from the Jagiellonian University and the University of Agriculture in Krakow.
Wide range of applications

The natural range of the common ash (Fraxinus excelsior L.) covers most of Europe, as well as Western Asia. The properties of wood such as elasticity, hardness, and impact resistance make it is used widely in many different industries. It is mainly used for tool holders and sports equipment, e.g. hockey sticks or oars. Its straight grains make it widely used in carpentry for the production of stairs, handrails, doors, windows, and veneers. The common ash is also an excellent material for parquet. Due to calorific value, it is used as fuelwood. In central Europe, it has been used as an ornamental tree in parks and along roads and city streets. In many countries, it has some ethnic and cultural significance. In France and Belgium fermented leaves of common ash are used to prepare frênette, a mildly alcoholic drink. There is also a very long tradition of using common ash as a source of natural healing substances. For example, substances in the root and leaves have a diuretic effect and help with gout and kidney stones. The bark and leaves extracts are used in treatment for rheumatic diseases such as rheumatoid arthritis. This plant also has cosmetic properties. In Poland, common ash is found in almost the entire country, except the highest floors of the mountains. It is an important component of several natural habitats.

Diseases and means of protection

Since the mid-1990 in Europe countries, we have observed dieback of this species, caused by the ascomycete Hymenoscyphus fraxineus. The ash common dieback is observed in Norway, Denmark, Lithuania, Austria, Belgium, the Czech Republic, Finland, France, Germany, Hungary, Italy, the Netherlands, Slovenia, Sweden, Estonia, Latvia, Switzerland, and Great Britain. This phenomenon threatening the existence of F. excelsior over our continent.

A wide range and variety of purposes of common ash wood cause that dieback of this species is an enormous problem, not only ecological but also economic. Given the above, solutions for renewal and preservation should be developed. It is even more important because the observed dying of common ash already results in very clear problems in obtaining seeds. To make matters worse the seeds are often poor quality and have low germination, which makes it very difficult to obtain new specimens of ash.

One way to protect and regenerate common ash is to obtain seedlings in vitro. Currently, the method of somatic embryogenesis can be used for this purpose. In this method, the embryogenic callus is inducted with somatic embryos at all stages of embryo development, i.e., globular, heart, torpedo, and cotyledonous stages. Ultimately, the somatic embryo can be used to regenerate the entire plant. However, the method of somatic embryogenesis is characterized by high cost and commonly observed genetic instability of callus cells. The cost intensity of this method results from the necessity of repeated passaging of in vitro cultures using a wide variety of growth regulators and culture media components. This multi-stage method also results in an increased risk of failure in obtaining the seedling, because each stage increases the probability of infection of the culture. All this makes that in callus cells in the process of obtaining seedlings by the method of somatic embryogenesis, spontaneous negative changes occur, which means that plants regenerated in this way are not as homogeneous as one would expect from the method of vegetative reproduction. In callus tissue, the number and structure of chromosomes change over time. In the long-term callus cultivation changes in the genetic material are accumulated leading to a progressive loss of callus cell totipotency, and thus the yield and quality of the seedlings obtained. For those reasons, the somatic embryogenesis method has not found a wide range of applications in saving common ash. To obtain seedlings, especially forest trees, which will have stable and equal characteristics, it is recommended to use the method of organogenesis, which not only ensures the stability of individual characteristics of trees but is also cheaper than obtaining plants by somatic embryogenesis.

The solution of scientists from Krakow
The scientists from the Krakow Universities came up to fulfill these expectations. The interdisciplinary research team composed of dr hab. inż. Katarzyna Nawrot-Chorabik, prof. UR from the Faculty of Forestry of the University of Agriculture in Krakow and dr hab. Dariusz Latowski from the Faculty of Biochemistry, Biophysics, and Biotechnology of Jagiellonian University has developed a technology for obtaining common ash seedlings by indirect adventitious organogenesis. This method omits the stage of forming and development of the somatic embryo, and thus significantly reduces the number of passages and expensive components of culture media. Plant regeneration occurs directly from callus tissue, which results not only in lower costs of seedling production but also, what is very important, improved genetic stability compared with micro-propagation by the method of somatic embryogenesis. Besides, the developed method allows obtaining calluses with selected genotypes, e.g. resistant to negative abiotic or biotic factors (including pathogenic fungi). The obtained seedlings have genotypes identical to the callus genotype and therefore are also resistant to harmful biotic and abiotic environmental conditions. This can significantly improve the condition of stands with common ash, positively affecting the ecological and economic aspects related to this species of tree. Centre for Technology Transfer CITTRU is looking for entities interested in cooperation in implementing the invention. 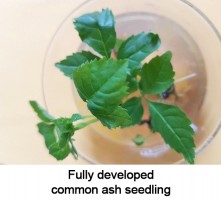 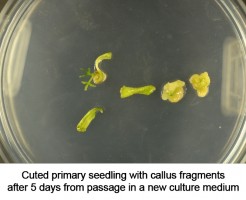 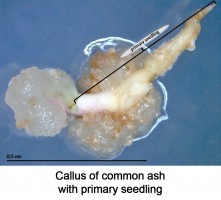