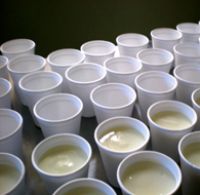 Lactoferrin is a protein with known antibacterial, antifungal and antiviral properties. Due to these properties, lactoferrin is widely used among others as compound of functional foods, dietary supplements or various types of pharmaceuticals. Specific use of lactoferrin was found in the prevention of infections in premature infants, newborns and older children. Oral supplementation with various forms of lactoferrin is important in reducing inflammation by neutralization of bacterial antigens (including LPS) and preventing the passage of bacteria from the intestinal lumen into the bloodstream that can cause sepsis in infants with very low birth weight.
Until now, the influence of lactoferrin on populations of probiotic Lactobacillus bacteria was not examined. The relation between lactoferrin saturation with metal ions such as iron and manganese and its biological activity is also not known.
The present invention, lactoferrin saturated with manganese, is distinguished by unique property of stimulating the growth of probiotic bacterial strains in gastrointestinal tract. These bacterial strains are part of the natural, beneficial bacterial flora of human. The invention is also distinguished by a broad range of possible applications which include:
Currently on the market there are many lactoferrin preparations. The distinguishing features of the invention as compared to other formulations are:

The invention in addition to stimulatory effect on growth of probiotic bacteria colonies retains all beneficial features of commercially available preparations of lactoferrin.

Currently the Centre for Technology Transfer CITTRU is looking for entities interested in licensing and commercial application of described invention. Cooperation with partners interested in joint R&D projects in scientific topic related to the invention is also desirable. 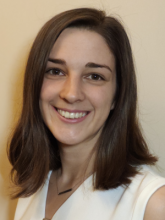